There’s a post in the standard called living the iLife and picks up on people selling all thier worldly goods and living out of a laptop. But this isn’t new, it’s been around for a while (that post is from August 2009), but this is the second story on the topic in the last two weeks or so, so maybe it’s gaining traction finally. 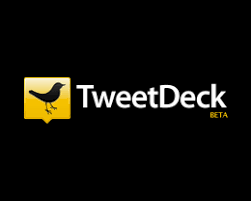 Tweetdeck have released there Android app to the public, but it’s Beta, and it’s got a lot missing. Here are my thoughts on the Tweetdeck app for Android and what it needs to displace the likes of seesmic, Tweetdecks arch rival and more platform specific apps such as Twidroyd.

Now, I’ve mentioned this before, but I’ve tried pretty much most of the Twitter apps available for Android, Seesmic, Twidroyd, Touiteur, HTC Peep, Twitter’s own app (basic), Twicca (pretty), Swift (fastest), TweetCaster (horrid), so I’m pretty sure I can comment on which ones work and which ones don’t.

We’ll start with the what’s good first and there’s several things, first up it’s not yet in the market so you have to download it from here (don’t forget to set the allow any app to be installed check box). This means you’ll have to watch twitter for notifcations of a newer version as you won’t be alerted by a little shopping bag just yet.

The yellow bar highlighting what’s new is a nice touch, the yellow dot’s near the top left and right also highlight new information that’s arrived in the specific columns is nice, but I’m not sure how long it’ll take before it get’s tedious.

The integration of all the feeds into the single stream is done very well, the colour coding makes it easy for you to spot what’s from which service, Facebook blue, buzz red and so on. Signing in is a breeze too, just sign in with your tweetdeck account and boom all your services are sync’d across.

The little twitter bird is nice, I like the bird in the notification bar rather some strange logo, so nicer that both Seesmic and it’s mutant Raccoon and Twidroyds dancing alien. When a post fails, the logo is upside down, a dead bird, pretty humorous.

Now the room for improvement bits, yes I know it’s a beta app and it looks like updates are happening quickly too it. One of the items I was going to point out was how large the font was and how it limited what you could see on a single screen. But within the last few hours that’s been fixed and the latest build has font size adjustment. I’m not sure if the The tweet which font size you use is a gimick or a nice way of letting other people know how you use the app.

Frequency of the updates, this is key for battery conscious people and there’s no way to adjust how frequently the app updates. Other apps allow you to set intervals from 5 mins  through to 6 hours for example. But there’s no option on Tweetdeck which needs fixing, for example I left Tweetdeck on all Saturday and my battery died around 6pm, when it would normally make it through a day no problem.

Audible notifications is missing too, I like to get a ping or a bird tweeting to let me know I’ve had a reply or a DM, but this is missing so you have to check. I don’t want to check so this needs fixing and by the current rate of progress, it should be sorted by the weekend.

Picture sharing, it’s just twitgoo at the moment, I like Twitpic but as far as I can see there’s no way to change it. Support for twitlonger would be nice too, Twidroyd has got that one sorted very well along with the also missing Link shortener of choice options, bit.ly etc.

Something that’s missing on Touiteur, but I’m glad to say is here on Tweedeck is location, you can either add a generic location or log into a specific place via Foursquare. I’m not sure if you set your locations once it stays or you have to keep adding locations to tweet’s that would be too tedious.

Number of tweets, I’m not sure how far this goes back, but there’s not ability to select 180 tweets for instance, it scrolls back pretty much through all your tweets, so not sure what impact this is having on storage, but not too worried.

A tiny niggle to see how someone has tweeted you have to open the tweet up and it shows you, web, Tweetdeck, peep etc. I like to see that on the stream, it helps me to see what people are up to, are they mobile or are they in front of a PC.

Overall, I like it, I think it’s going to continue to improve of the next days, weeks and months into a pretty solid integrated social media application for the Android platform. At the moment I keep flicking back and forth between it and Twidroyd as I find something I can’t do without, but I’m sure before long Tweetdeck will claim a place on my homescreen as the twitter app of choice.

if I’ve  got something wrong let me know, if you can think of other items that would improve it let me know.

My HTC Hero is up for sale on eBay, only 1 bid so far, but interest only tends to happen in the last 12 or so hours. (not to self don’t bother listing things for 5 days again).

It’s an A1 condition and has the latest official Orange firmware on it, Eclair aka Android 2.1.

Just updated the firmware on my e71, so now having to re-install mail4exchange via ovi, this is horrible. Considering replacing the e71 with another HTC Desire through work and the interface of S60 is horrific compared to Froyo.

I’m trying out the Vignette app for my Android phone, it’s a camera replacement that allows you to add frames and all sorts of effects. There’s a free version in the Android store, but taking just one photo, I decided to upgrade to the £2.99 pro version and it’s a pretty cool app.

It moves the processing of photo’s from the PC (or Mac) to the phone itself and makes it easier to add interesting effects to a photo, either before you take it or afterwards.

This is the breakfast table taken with a very leaky Polaroid camera from the Seventies. There’s a Flickr group for the app too, so if you’re interested in more photo’s take a look here.

At the Orange Live 2010 the most covered keynote was Peter Sondergaard, SVP at Gartner’s ‘what’s hot for IT and Consumers’. We’ve covered pretty much most of the content from the event here on this blog. I’m pretty sure a lot of what was said by Sondergaard has already been covered, but I found a small point on the skills that Sondergaard suggested will be the key to success in the workplace, very interesting;

Vendor Management skills; the first skill that Sondergaard stated was the ability to manage you partners and suppliers successfully. With the advent of Cloud computing and virtualization, the ability to perform all the required functions is limited to a few huge organizations, so the need to partner is key to success. To offer blended solutions to consumers requires an ability to manage affectively the partners involved.

Business Intelligence; Sondergaard spoke about how data that is not seen as critical now will be come valuable in the future. Sondergaard didn’t call it ‘meta data’ but I’m guess that’s what he meant, data that is collected or created as a result of another transaction. Sondergaard suggested that traditional business models will therefore become obsolete as the data that has to be managed evolves.

Within the Orange group there are R&D units working on some pretty cool technologies and also working with some of the data that Orange makes available through API’s. The ability to understand the importance of this new data and understand how this data can be built upon can provide new revenue streams.